I have been asked to select an image which I might work with in my final project. My mind immediately leapt to a graffito from the Palatine Hill in Rome known as the Alexamenos Graffito, or graffito blasfemo (blasphemous graffiti): 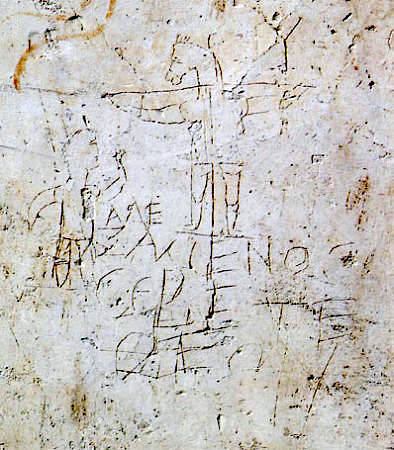 The image, scratched into a plaster wall, depicts a man standing below a crucified person with a donkey’s head attended by the description “Alexamenos worships [his] god.” Modern Christian viewers  correctly identify this image as a jest against a Christian. This image, however, is much more complex than simply calling Jesus an ass, and implying that Alexamenos is a fool.

The same symbol which renders the image recognizable is the same that leads to misinterpretation: the cross. Today, the cross is the universal ubiquitous symbol of Christianity. This was not so in third century Rome when this image was produced.

In Roman culture, the cross was immediately recognizable as a symbol of criminal  otherness. Only non-Romans were crucified, so by virtue of this alone the artist is making claims about the person of Jesus- he was not a Roman, therefore not authoritative. The artist was not content to let the cross alone speak to this characterization and drew in the horse’s head, the connotation of which persists. Crucifixion was also reserved for severe crimes, such as being a traitor. This artist communicates that Jesus was not a Roman, and also a most deplorable criminal. It would be akin to symbolizing a modern day advocate for peace with a noose.